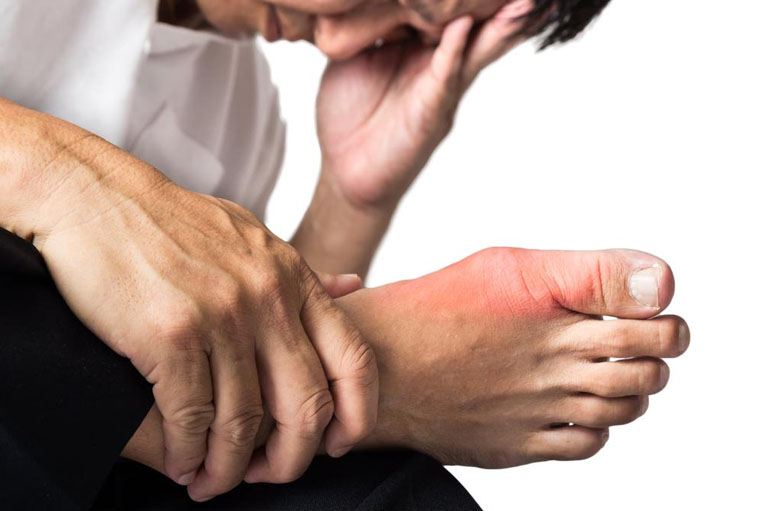 Gout is the most common type of inflammatory arthritis, where sodium urate (uric acid) crystals are deposited in your joints. These may be present for years without you knowing they are there, but on occasions, they can trigger an ‘acute’ attack of gout. Attacks of gout usually come on very quickly, often during the night. It affects more men than women and can affect men of any age. Women rarely develop gout before menopause.

A substance called urate (uric acid) builds up, sometimes because your kidneys are not able to get rid of it quickly enough. Over a period of time, this leads to urate crystals forming in and around your joints. Once there are a lot of crystals in your joints, some of them can trigger a sudden painful episode of severe joint inflammation (an ‘attack’) which usually settles back to appear normal within a week. If untreated these attacks get more common and spread to involve new joints.

What are the symptoms of gout?

An attack of gout can cause;

Attacks typically affect the big toe or the knee joint and usually start at night. The symptoms develop quickly and are at their worst within 12-24 hours of first noticing anything is wrong. Any light contact with the affected joint is painful – even the weight of a bedsheet or wearing a sock can be unbearable. Other joints may also be affected, including other parts of the feet and ankles, elbows, wrists and fingers. If several joints are inflamed at once this is called polyarticular gout. It is very rare to have gout in the spine, shoulders or hips.
Urate crystals can also collect under the skin, forming small, firm white lumps called tophi. These are not usually painful but can be embarrassing and disfiguring. Sometimes they get inflamed, break down and leak gritty white material – the uric acid crystals themselves.

It is normal and healthy to have some urate in the blood. Your body usually gets rid of any excess urate through your kidneys into urine; however, if your body is making too much urate or your kidneys are unable to remove enough, then urate levels start to rise. If the level goes above the saturation point (critical level – 6mg/dl), it is possible for urate to form crystals of sodium urate. These crystals mainly form in and around joint tissues, especially joints at the ends of your legs and arms, such as your finger and toe joints. The crystals gradually build up in your cartilage and other joint tissues over years. You will not know this is happening. When there are a lot of crystals in your joints some of them can spill out into
the joint cavity. This process is called crystal shedding. The hard, needle-shaped crystals touch the soft lining of the joint (synovium) and incite inflammation very quickly. Over the next few days or weeks, the crystals are gradually broken down and the inflammation process settles down on its own.
Apart from causing sudden attacks of inflammation, a build-up of crystals can eventually lead to tophi forming in and around your joints. These hard tophi can grow and cause pressure damage to your cartilage and bone. This is just like the damage caused by osteoarthritis and can cause regular, daily pain. At this stage, the condition is often called chronic tophaceous gout.
Several factors can affect the level of urate in your body:

Most gout is primary and is usually due to a combination of factors, for example, through having inherited kidneys that are not very good at getting rid of urate and then becoming overweight.
If you are prone to gout and have urate crystals in your joints, several things can encourage urate crystals to shake loose from your cartilage and trigger an ‘acute’ attack. These include;

What is the outlook?

Attacks can vary from person to person. Some people only have an attack every few years, while others have attacks every few months. In time, though, attacks tend to happen more often and new joints are affected.
With modern treatments and possibly some changes to your diet and lifestyle, this type of damage can usually be prevented by bringing urate levels in your tissues down below the point at which crystals form. Lowering your urate levels will prevent new crystals from forming and slowly break down the crystals that are already there. It may take as long as two to three years of treatment to completely clear your body of urate crystals, but once they are gone then the risk of acute attacks of gout and of further joint damage from tophi is removed.
As well as the threat of causing attacks of gout, persistently high urate levels can lead to;

A diagnosis is often based on your symptoms and an examination of the affected joints, but your doctor may suggest the following tests;

– A blood test can measure the amount of uric acid in your blood. The critical serum level of urate (the saturation point) is around 6mg/dl. A raised level of urate strongly supports a diagnosis of gout but can’t confirm it – not everyone with a raised level of urate will develop crystals in their joints, and it’s possible for urate levels in the blood to be normal at the time of an acute attack.
– X-rays of joints will reveal joint damage if you have long-standing and poorly controlled gout. However, x-rays are rarely helpful in confirming the diagnosis because they’re usually normal in the early years of having gout.
– Synovial fluid examination involves taking fluid samples from a joint through a needle and examining them under a microscope for urate crystals. This test can confirm the diagnosis but isn’t always practical – it can be difficult and sometimes uncomfortable to draw fluid from a small joint such as the big toe. However, it may be possible to identify a few crystals in a sample taken from your knee, even if you’ve not yet had an attack of gout there.

What treatments are there for gout?

There are two main parts to treating gout. These are:
1. treating the acute attack of inflammation when one or more joints are very inflamed and painful.
2. ongoing treatment to reduce the level of urate in your blood and get rid of urate crystals.

Non-steroidal anti-inflammatory drugs (NSAIDs)
Acute attacks of gout are often treated with oral NSAIDs, which can ease pain and possibly reduce some of the inflammation. Examples include ibuprofen, naproxen and etoricoxib.

Colchicine
Colchicine is made from the crocus plant. It’s not a painkiller but it’s often very effective at damping down the inflammation caused by the crystals touching the joint lining. As with NSAIDs, colchicine tablets should be taken as close as possible to the beginning of an attack, and certainly within the first 24 hours of the attack starting, otherwise it may not be effective. The recommended dose of colchicine is 0.5 mg two to four times per day, depending on your size, age and whether you have other health problems. Some people are unable to take colchicine because they have side-effects such as nausea, vomiting or diarrhoea. For this reason it’s best to start at a low dose and only increase it if there’s no upset. You shouldn’t take colchicine at the same time as NSAIDs.
Steroids
If an acute attack of gout doesn’t improve with NSAIDs or colchicine or if you’re at risk of side-effects from these drugs, your doctor may prescribe a steroid injection into the joint or muscle, or a short course of steroid tablets (usually no more than a few days).

Other treatments for acute attacks
Putting an ice pack on the affected area can reduce some of the swelling, heat and pain.
You should always use ice packs alongside any drug treatments your doctor has prescribed. Resting the painful joint also takes some of the edge off severe pain.
Ongoing treatments to reduce urate
The drugs given to ease an acute attack don’t get rid of the urate crystals or reduce blood urate levels. Drugs are available that can lower urate levels and get rid of urate crystals in your body. It is easier to treat the earlier you start. You may still have acute attacks when you first begin urate-lowering treatment, so can take daily NSAIDs or colchicine to dampen down inflammation while your urate level is brought down. You’ll continue to be at risk of acute attacks for at least 6 months and probably longer, until all the crystals are dissolved away. It can take as long as 2-3 years to clear your body completely of urate crystals. Urate-lowering drugs are usually very well tolerated, but you might have to stop using them if you have side-effects such as a rash or indigestion (dyspepsia). Aside from this, you should continue to take them until your doctor tells you to stop.
Allopurinol
Allopurinol is the most commonly used urate-lowering drug. It works by reducing the amount of urate that your body makes and is usually taken once a day. Your doctor will start you on a dose of 100 mg a day. If your urate level hasn’t come down enough after a month, your dose will be increased by 100 mg. You may need several dose increments of 100 mg roughly each month until you’re at the right dose (maximum dose is 900 mg but most people reach the target urate level by taking a dose somewhere between 200–500 mg).
Allopurinol is broken down and excreted through your kidneys, so if your kidney function is impaired you may be started on a lower dose (50 mg) and the dose increased more cautiously. Increasing the dose gradually is also less likely to result in side-effects
such as a rash, headaches or nausea.
Febuxostat
Febuxostat is a more recently introduced drug that also reduces the amount of urate made in the body. However, unlike allopurinol it’s broken down by your liver and is therefore particularly useful if you have kidney problems and can’t take a high enough dose of allopurinol. The starting dose is 40 mg. If your urate levels haven’t lowered after a month, the dose of febuxostat can be increased by 40mg (maximum of 120 mg daily).

There are a number of changes you can make to your diet and lifestyle to help ease attacks of gout. The most useful things you can do are:

If gout has already caused joint damage, the treatment will be the same as for osteoarthritis, including:

Gout is a disease in which crystals form in your joints. An attack of gout can be extremely painful and continuing crystal formation can cause long-term joint damage. Fortunately, there are a number of treatments available that can ease the pain and others that can reduce the risk of further attacks or even get rid of the problem altogether. With suitable treatment, gout is unlikely to result in permanent joint damage.
For consultation, please contact TheKneeClinic on ph +91 9136401071 or click on the website link
https://www.thekneeclinic.in/contact.php